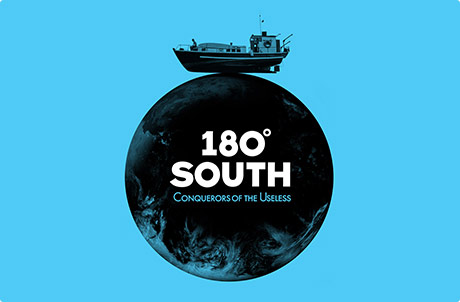 A commenter put me onto this new movie 180° South, specifically it’s a film about surfing, sailing and climbing, but generally it’s a remake of a legendary trip and film from 1968. Interesting slide show of the trip here too (narration over photos, so simple, so good, can’t believe I haven’t seen this sort of thing before?)

It’s this original trip that has really caught my imagination – Yvon Chouinard (founder of Patagonia & Black Diamond) and Doug Tompkins (founder of The North Face), plus three other chums set off in an old camper van to surf, ski and climb their way through South America, on their way to be the 3rd team to climb Mt. Fritzroy (Cerro Fitz Roy) in Patagonia (it’s that iconic granite slab used on the Patagonia logo).

Unfortunately I can’t find the original film (Mountain of Storms) online other than this short clip (voice over is hilarious), but just ordered the dvd from the Patagonia store.

But the fascinating story continues today as Doug Tompkins (with a bit of help from Yvon) is buying up huge chunks of wilderness in Chile and Argentina and creating his own national park which on completion will be given back to the government. Apparently he’s now one of the top land owners in the world, with an estimated 2 million odd acres!

Side note: The first person to climb Mt. Fritzroy was legendary French climber Lionel Terray (with Guido Magnone in 1952) and interestingly the title ‘Conquerors of the Useless’ references the title of his autobiography.