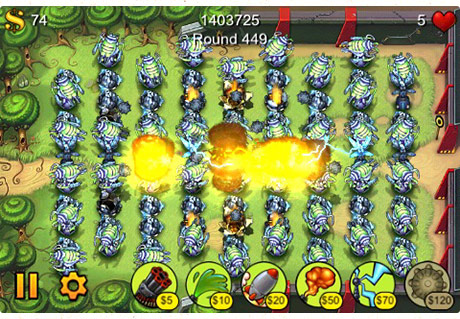 I‘m currently addicted to the iPhone game Field Runners, basically there’s wave after wave of bad guys trying to get from one side of the screen to the other which you have to destroy using various weaponary towers.

The more people you kill the more money you get to build bigger and better towers. Super simple, it mainly plays itself (shoots people automatically) all you’ve got to do is decide what towers and where. You can get quite creative with the tower positioning to make the guys walk as far as possible so you’ve got plenty of time to pick them off.

Before I found Field Runners I was playing a very similar game called The Creeps, which is also great.

Incidently, if you want to screengrab something on your iPhone just hold down the home button then press the power button, screen will flash, job done.