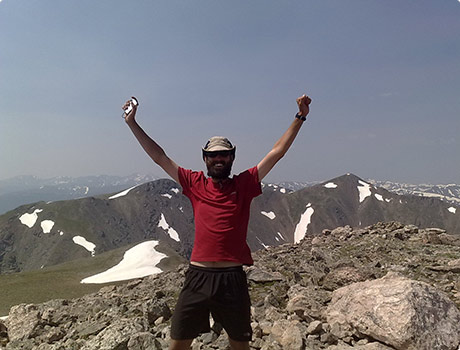 Iwoke at 5.30 to howling winds so i could bag a few mountains and break the back of the 45 miles to Grand Lake. There was no trail to follow so i had to pick my way up and down the boulder fields of both Parry and Bancroft peaks before picking up the trail at the base of James’s Peak. I decided to avoid a ridge described as boarder line rock climbing due to the high winds but it meant an extra 1000 feet of down them up. Bugger!! I finaly summited James’s Peak which was the last of 3 13ers before lunch. I followed the ridge of the divide until Devils Thumb pass where i nailed it down a valley for a further 10 miles. The following day a few miles from town i was met on the trail by Cookie and Nicky who were armed with beer and fresh fruit. That was all i was thinking about for miles so a good end to a tough day. I can understand why many people solo hike but its not my cup of tea. Paul