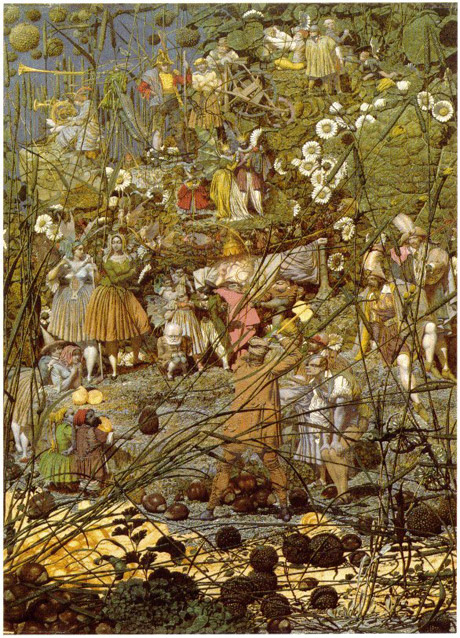 The Fairy Feller’s Master-Stroke by Richard Dadd is one of my favourite paintings, but I haven’t even seen it yet. I knew the tate had it in their collection, but couldn’t find where it was being displayed if at all. Just discovered today that they’ve got it on show at the Tate Britain, where Dadd has got a whole room to himself.

I love the story about this painting – Richard Dadd went on the ‘grand tour’ to see the old world, Greece, Egypt etc. Something happened while he was away, because he came back stark raving bonkers. Murdered his father (some people say he actually ate his dad’s brain, but this might be false) Police caught him and threw him in the infamous Bedlam mental asylum. He spend 9 years of his time in there painting the Fairy Feller’s Master-Stroke. He painted with the smallest brush and a microscope to create the most insane amonut of detail, e.g. drops a dew on every single leaf. He worked and re-worked the painting so much that apparently it’s almost 3D because of hundreds and hundreds of layers of paint. I just love the unconventional composition, it’s all over the shop, scale and perspective seem to be fucked, there’s no horizon and the interlocking grasses and daisies keep your eyes darting about at a hundred miles an hour. It leaves me breathless.

Other interesting facts: The Fairy Feller’s Master-Stroke, was to become the title of a song by the rock band Queen. The Wee Free Men, a novel by Terry Pratchett, edited in 2003, was in a central part inspired by The Fairy Feller’s Master-Stroke. Pratchett’s friend Neil Gaiman includes a reference to Dadd in Sandman. The painting also is a plot element in The Witches of Chiswick by Robert Rankin.