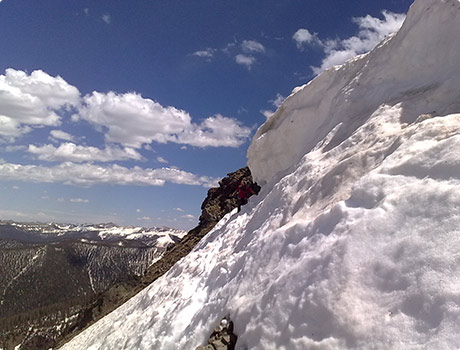 Touching cloth is the scale with which we rate how scary something is – this traverse was definately a 10!

This incident followed a fantastic but tricky 2 mile ridge walk along the divide up to Knife Edge Mountain and was one of the most terrifying incidents yet. At this particular point there was not enough room on the ridge to remove our packs and put on our crampons to tackle a bank of snow with a near vertical drop to one side. One slip and your a gonna! Cookie went first kicking steps but at one point he did slip throwing a huge ball of snow off the side of the mountain which gave my sphincter muscle its first good work out! It was not that the section was tricky it was more the exposure that adds to the fear factor.

This was an alternative route to avoid Knife Edge Ridge which we were advised not to attempt with this much snow. For anyone following the CDT northbound the official route looks like a walk in the park in comparison. If you attempt the actual divide as we did then go to the left of the notch!! – Paul.