The newest member of Unit 2 is Nima who seems really, really nice. He’s also quite interesting as he’s in the band Hush the Many (Feed the Few), you can listen to some of their music on their myspace page. They’re described as “a quartet who operate in that fabled half lit world that exists between classically lined soft psychedaelia and the stranger more enticing and timeless elements of English folk”. Their first single ‘Song of a Page’ is out on April the 9th, you can pre-order it now :) 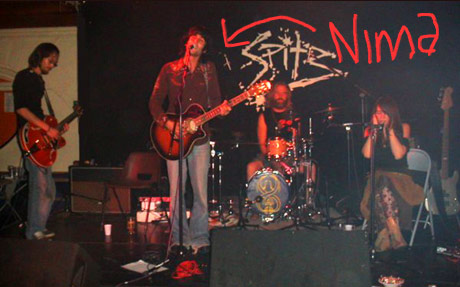 This review was very nice:

“I never thought I would say an unsigned band were my favourite band of the moment, but with Hush The Many they really are. I have albums by hundreds of artists but I love this band because when they perform live they move me enormously and make me want to do it all over again. Musically they create some of the most delicate yet passionate melodic rock and love songs I have ever had the privledge and pleasure to experience. I run these gauntlet of emotions at their gigs ranging from tenderness, sadness, peace to sheer joy to be alive. You have an amazing guitarist in Ruban who pulls the most unearthly but wonderful sounds from his guitar, Jo on cello who is mesmerising to watch. Alex on bass who also has a beuatiful but fragile voice. Al on drums adding power to the mix and lastly but so not least – Nima on lead vocals and guitar who writes the lyrics and has to be one of the most charismatic performers I have had the pleasure to watch front a band. I’ve seen them live many times this year and I still get excited going to a gig. How many unsigned bands can you say that about? Go and see them on their next outing, I have yet to meet anyone who has regretted it.”

More reviews here and here. I’m sure we’re going to have some sort of psychedelic house party to welcome Nima properly to the fold shortly. El’s already trying to rope him in to serende her during the day and play live phone holding music…