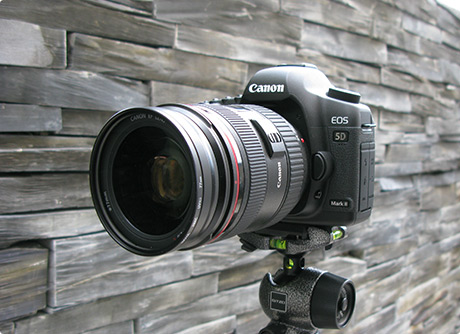 Well this is the big decision I’ve had to make recently and to be honest I’m still quite shocked & amazed the Canon EOS 5D Mark II above is where it all ended?! I’m an amateur film maker and very amateur photographer, what the hell am I doing with a huge DSLR? Some of you probably already know the reason, I didn’t at the time, but below is a summary of how I found out.

Where this all started was me wanting to take my hiking photography up a notch, basically buy a little compact that takes a better picture than my phone! Being a style slag I fell in love with the Leica X1. Easy decision I thought, big sensor, little body, doesn’t weigh much, looks a bit like a M9, i.e. drop dead gorgeous. Job done, I put my deposit down and pre-ordered it months ago.

Then while I was waiting for the Leica production line to get round to making my camera I came across something called a 35mm adapter. This is the review by Tom Guilmette that I first came across and does a good job of explaining what it is:

$400 and I can make my Sony HDR SR12 do stuff like that, I want one! Shallow depth of field is something I’ve always jealously admired in other peoples work, but up until recently I didn’t even know enough about it to know what you needed to achieve it.. Ok I had my mission, find the best 35mm adapter to take to New Zealand, this is going to be awesome! After much research I couldn’t really find anything that beat the JAG35 Pro on weight, price and size.

I started to freak out that carrying 2 cameras (video & still), a fairy large adapter, plus another lens on the end, not to mention all the chargers, plugs and cables for them all was getting out of hand.. There’s got to be a better way eh?

Back on google I came across this film by Sebastian Lopez, shot on a Canon 7D:

Whoa, that blew my pants right off! Ok now I’m getting somewhere, this wasn’t what I was looking for, but I don’t care. In fact how can I use a camcorder anymore after seeing footage taken with this new breed on DSLR? Ah yes, probably got something to do with the price, size and the weight.. Ah what the hell!

Anyhow it’s getting late, to cut a long story short – I cancelled my X1 order, then chose the 5D over the 7D because of bigger sensor blahdy blah, general consensus by reviewers yadda yah and the third party Magic Lantern Firmware, that’s not yet available on the 7D (didn’t want to risk it not being available before NZ). 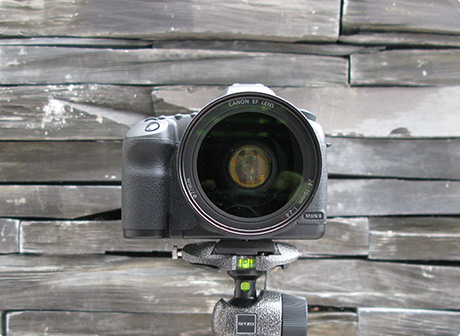 This decision pained me. There’s a lot of different opinions flying around and it’s hard to find consensus. Please don’t tell me I bought the wrong one, my brain hurts from thinking about it.. I only wanted to carry one lens so I thought I’d get a wide angle with a bit of zoom, I picked the Canon EF 24-70mm f2.8L USM. All I can say is that it’s the best lens I’ve ever used (although that’s not saying much), and it definitely looks bigger in real life than on the internets! I love looking down that massive piece of glass at the front though, feels like I’m talking to Hal 9000 ;)

What’s next? Well I think I can live without the remote controlled D5 helicopter, but when I see stuff like this by Luke Humphrey, I start thinking maybe I need a Merlin Steadicam..

I’m really looking forward to using this camera (I don’t think I’ve ever been so excited), hopefully this blog will soon be full of all the beautiful images I’ve been able to capture with it :) 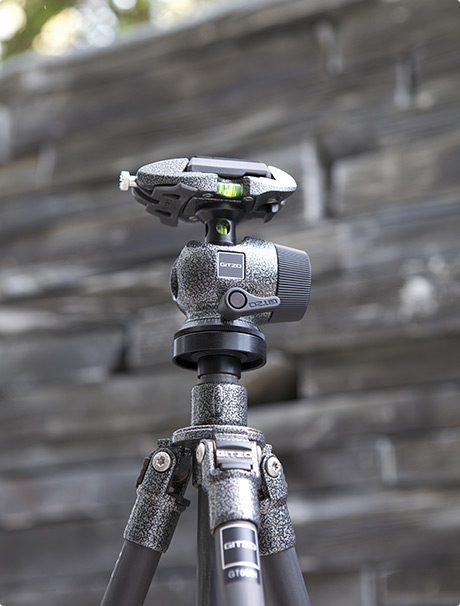 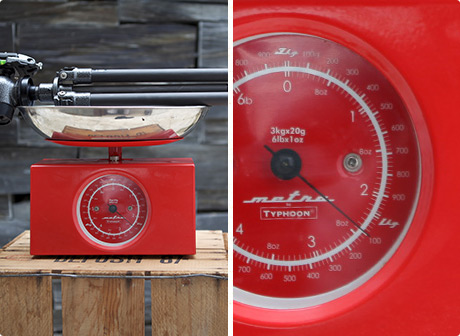 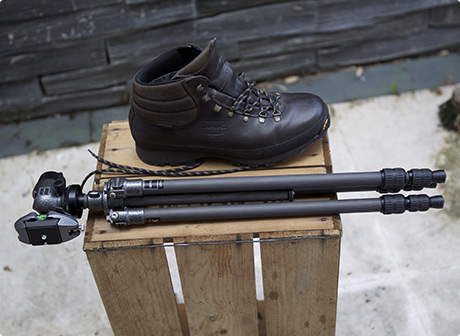 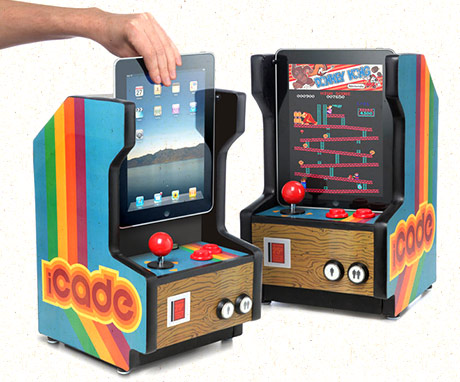 I‘m lovin’ Think Geek’s April Fools today, but I tell you what, I would genuinely buy one of these if they were available, brilliant :)

Aw, they’re so cute! Check out Life’s Small Cars photo gallery. It becomes apparent looking at these tiny cars from yesteryear – modern small cars have got it all wrong, they just look like ‘a small car‘ that’s designed to be small. If they made them look like big cars, but in miniture, that would be way more appealing, well to me anyhow.

Interesting photos of The World’s First Nuclear Power Plant, built in Russia, 1954. I’m a sucker for big industrial dials, switches, gauges and such like, this thing has a fair few. Not sure what that circular thing with the grid pattern is, but it looks pretty cool. 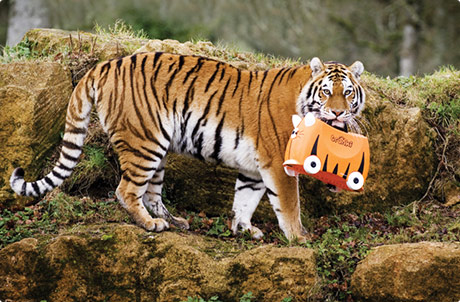 While I’m on the subject of Trunki’s, Rob sent me this amazing shot he managed to capture of a fricking real live tiger carring one in her mouth! Apparently this huge man eater really took a liking to Tipu the tiger Trunki, they had a right job getting it back off her.. Check out Trunki’s Flickr for more shots of tigers and monkeys. 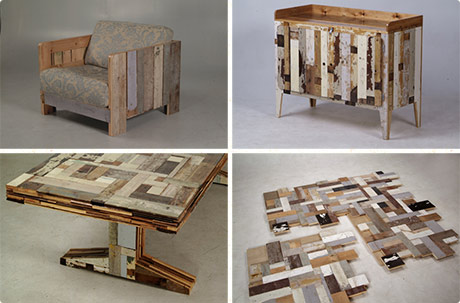 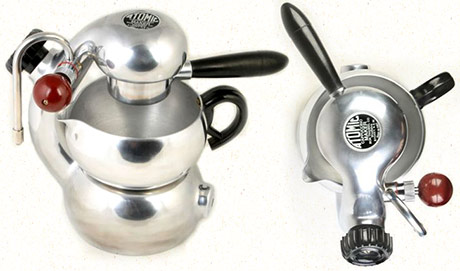 Ifirst clapped eyes on the stove top Atomic Coffee Maker on FutureConscious: Philly’s Wish List. Loved the look of it, beautiful curved lines and rugged mechanical utility. I started to look into it a bit and was quite surprised to find vast amounts of info from all sorts of sources. It really seems to be a much loved and ‘cult’ coffee machine. Anyhow fascinating stuff, there’s a quick summary of what I’ve found so far:

It was designed in 1947 by Italian Giordano Robbiati, it stayed in production (not changing a great deal) until 1986 when the factory burnt down. It’s been re-badged by various importers round the world, such as: Stella (Austria), Qualitat (Hungary), Robbiati (Italy), A&MG Sassoon (UK), Bon Trading (Australia), La Sorrentina and Thomas Cara.

There’s a blog dedicated to nothing but the Atomic – Worlds Best Loved Coffee Machine. Or you can buy a whole book about the Atomic – Enduring Design. Maybe you fancy getting a secondhand Atomic, then check out the eBay buying guide. And if that’s not enough, you can get all you will ever want to know about the history, care & maintenance, restoring and making coffee with one from this Atomic Site from New Zealand.

Recently the Atomic has been resurrected as the La Sorrentina Coffee Machine by an Australian entrepreneur (Ikon exports?) who has begun manufacturing a premium reproduction of the Atomic which is a best seller in Oz. 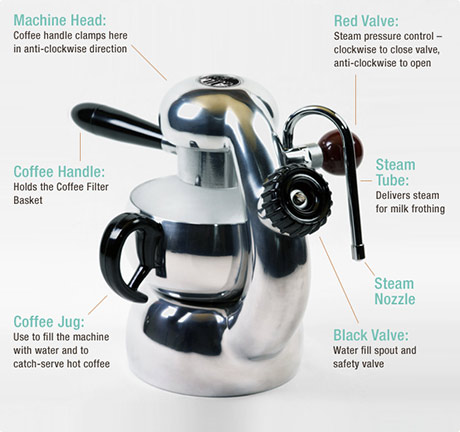 For us Limeys the brand new models are being imported to the UK exclusively by Atomic Coffee House, you can buy one from their site for £279.

For me the new ones feel a little cold, have a look at some of the beautiful vintage ones for sale here, the worn aluminium casing feels so much warmer and friendly. Shame they’re in Australia though, will be keeping my eyes peeled on eBay until I find a good one :)