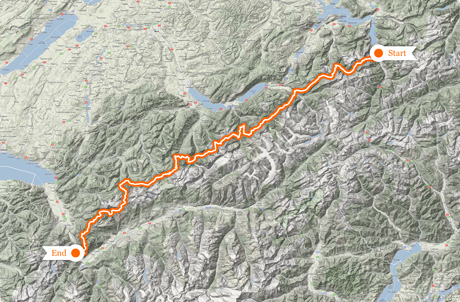 Probably the most common questioned I get asked is – what have you got planned for your next walk? Well I’ve booked some cheap flight to Switzerland (£40 return, can you believe that? – Aer Lingus), ordered some maps and have been planning the route all weekend :) Click the image for a bigger map of our planned route.

I haven’t been to the Alps since ’95 (I used to go just about every year) so it’s about time for a visit. I’ve been keeping my eye on a new series of long distance trails crossing the Alps called Via Alpina. They just updated their site with lots more info on the routes and handy download-able section pdfs. There’s 5 trails in all, the daddy being the Red Route which is 1500 miles. Also found the site of Judy Armstrong who did a loop mostly on the Via Alpina trails, crossing the Alps twice in a whooping 3,300 mile single season trip!

I’ve a picked a little section for me and Nicky across Switzerland (Bernese Alps), mostly on the Green route, but with a bit of the Red at the end. As well as being part of the Via Alpina, (most of) the route seems generally known as the Alpine Pass Route. I found a site – Activity Workshop, that has a lot of online information about the walk, they also plotted the route on google maps which I’ve found quite handy. Also there’s a Cicerone guide of the Alpine Pass Route, by the legendary Kev Reynolds.

Can’t wait till the end of June now, I’ll be blogging as we go as usual. Hopefully if Nicky enjoys herself, we might plan a full traverse of the Alps in 2010 :)