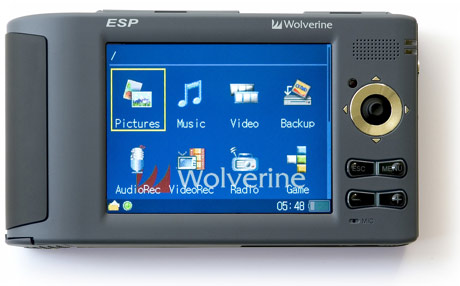 I posted a few days ago my thoughts on what camcorder I should get to video my big walk. Most people didn’t think I’d be able to store the video on an iPod, but I’ve had a number of good alternative suggestions. Most promising of which is the Wolverine ESP 5250, it’s basically a 250GB portable hard disk with a memory card slot already built it. If think this would be plenty of storage and a reasonably minimum effort solution. The camera I like is about 460g with battery, the Wolverine is 290g with battery, so that makes the basic setup 750g. Which is dissapointingly exactly the same as my old camera… I was hoping to reduce weight, but at least only half of will be round my waist which should make walking with it more comfortable.

But I also like the idea of spending the £350 that the Wolverine would cost on eight or so 8GB memory sticks (can get them £45 on amazon), they hold 1 hour of full quality video and don’t weigh anything or take up much space. Not much total storage, but I think I might be able to juggle them about sending full ones to someone who can then copy them to a computer and post them back to a post office pick up point we know we’ll be going through. It sounds a bit more risky, lost or delayed/missed in the post etc, but would be incredibly light weight!

Also of note is the HDR-SR12E, which Sony have just announced. Looks nice, love the big metal knob on the front, plus it records full 1920×1080 video. Only problem is the 120GB hard drive isn’t quite big enough, would still need to juggle video around a bit on memory sticks, which I’m not sure is worth the 100g weight saving (comes in at 650g with battery).

So after all that, the solution I think I might go for is just the Sony HDR-CX6 and a bunch of memory sticks which I’ll have to send back and forth. It might end up being a bit of a headache… but I really don’t want the extra weight, sure it’ll all work out fine in the end. Going to sit on it for a while though before I buy anything, might still change my mind. Thanks everyone for your suggestions and advice :)

3 thoughts on “Update of my video solution for backpacking”