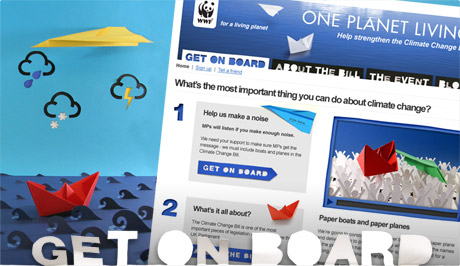 For the past couple of weeks my desk has been slowly disappearing on a mountain of paper boats, planes and assorted cut out paper graphics… All for a good cause though, WWF are campaigning to get the UK government to tighten up on Carbon emissions in the Climate Change Bill currently going through parliament. Why all the paper boats and planes? Well we’re trying to highlight the fact that the fastest growing source of C02 emisions – international aviation and shipping – aren’t currently included in the proposed carbon budgets.

Get on Board and help strengthen the Climate Change Bill.

It’s been a good project to work on, I’ve really enjoyed designing/cutting/folding it. Now it needs lots of people to get on board, so make sure you head over and sign up.

POKE won the pitch for the site by coming up with the idea to write all the petition signatures on the biggest piece of paper that we could source, then fold it into a massive paper boat and plonk it into the Thames to float past the Houses of Parliament! Sadly that didn’t turn out to be possible, or at least practical. We’re still going to build a massive paper boat and plane, but carry them on a sea of supporters to parliament instead. Not sure the exact date of the event yet, but will post details as soon as I know.