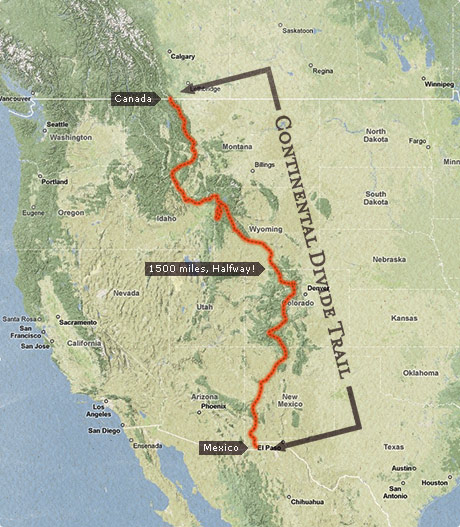 Some of you have already seen the video I shot of our 3000 mile hike across America, but while I was carrying the camcorder, Paul was carrying a digital camera. He’s been busy uploading them to his flickr, I don’t think he’s quite finished writing the titles yet, but i can’t resist re-posting some of them here. I’ve tried to choose an image that best describes each aspect of what made the CDT such an enjoyable and amazing experience. 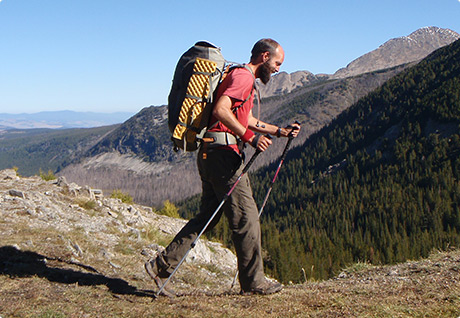 Well this was the main stay of our trip to say the least, on a usual day we’d start walking at 7am and stop walking at 7pm. In those 12 hours we’d normally cover about 20 miles. 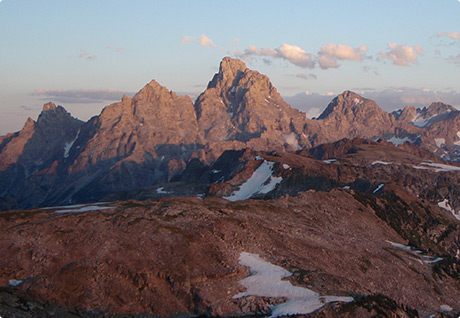 We saw some amazing sights along the CDT, but probably best of all was this view of Grand Teton from the top of Little’s Peak. This wasn’t actually on the CDT though, we made a rather substantial but ultimately worthwhile detour. 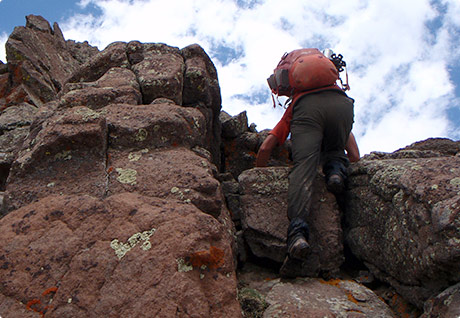 Onwards and upwards! God knows how much we climbed in total actually I’ve just googled it: 124,269 meters, that’s 77.6 vertical miles of ascent! 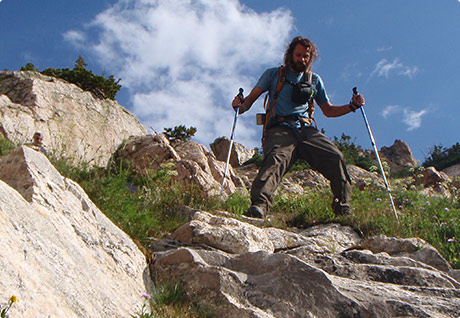 What goes up must come down. In some ways this is the bit you look forward to least, gives you knees a real pounding. 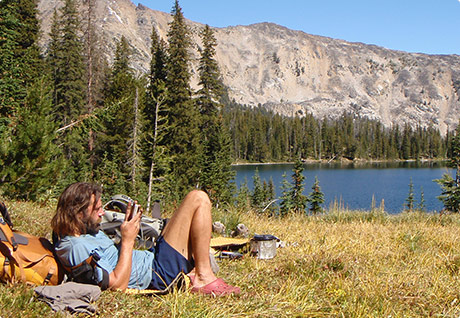 You can’t walk all day and more importantly you need to keep refueling yourself (5,000 Calories a day!), here’s a run down of our daily breaks:

Generally I wouldn’t ever think about CDT as a whole, not even as a section or day, I would just be focused on one break at a time, watching the clock – only 30 min to go until lunch etc… 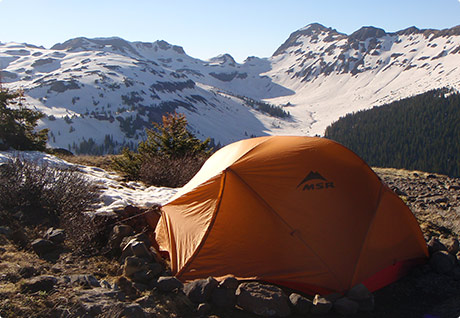 Not sure how many nights we spent under canvas, but I guesstimate it’s probably about 140. The old MSR Hubba Hubba did us proud and withstood some pretty stormy nights. 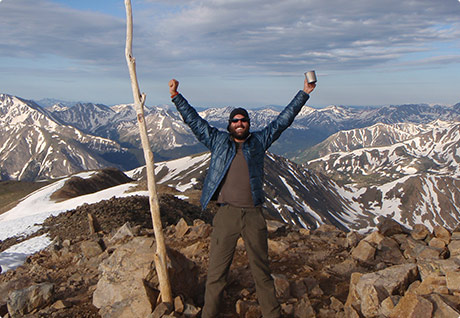 The route itself doesn’t go over that many peaks, but a few detours saw us on top of some pretty special places. best of all was here on top of Mount Elbert 4,421m. 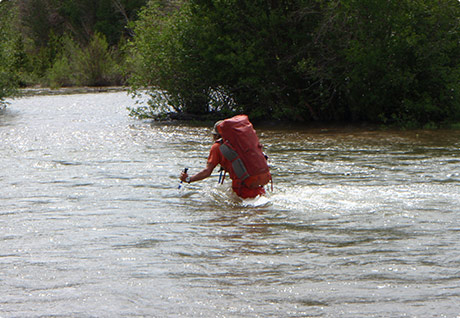 Compared to European hiking, there’s very few bridges along the CDT. We were constantly getting our feet wet, for which we found our Crocs indispensable. This image is me crossing the fastest, deepest and widest body of water we had to tackle. It was more like a bloody estuary feeding Twin Lakes, should of taken the long way round in retrospect… 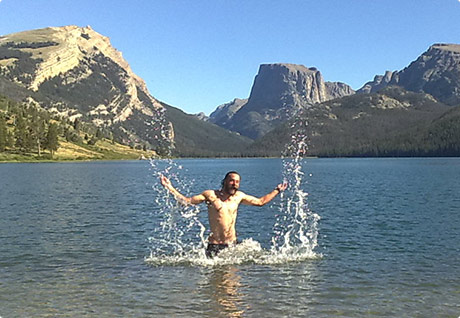 We could only have a shower/bath once a week when we headed into town to buy some more food. Luckily there was plenty of opportunities en-route for a quick rinse, most beautiful of all was here at Green Lakes. 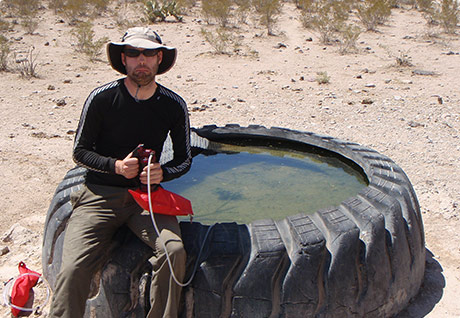 Most of the time the water was crystal clear and went straight from the stream into out bellies. But in New Mexico and the Great Divide Basin the quality and frequency was pretty dire, so my water pumping muscles got a bit of a daily workout. Here’s Paul filtering water out of a old tire surrounded by cow shit as far as you can see in each direction. We never got ill though, cast iron stomachs :) 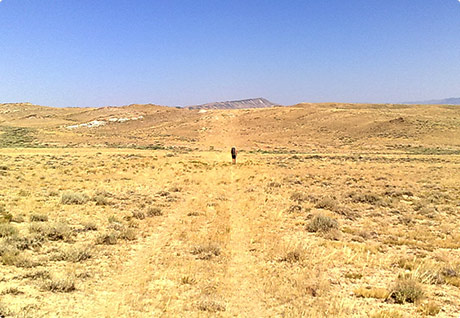 I‘m used to walking in mountains, desert hiking was a new experience for me. Interesting enough in it’s huge barren nothingness, but probably the best thing about it was you could notch up 30 miles a day easy and get out of there fast. 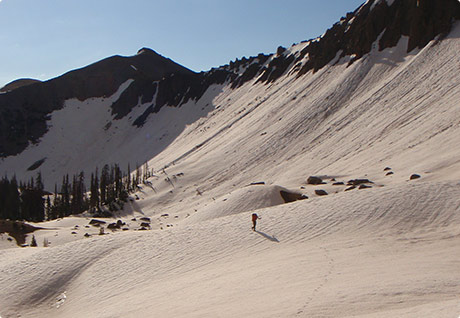 Shit loads of snow, more snow than I was expecting, most of the towns we past through had record breaking snow falls the previous winter. But I like the snow so loved it, the San Juan Mountains section was by far and away the most ‘snowy’, we could only average about 15 miles a day in those conditions. 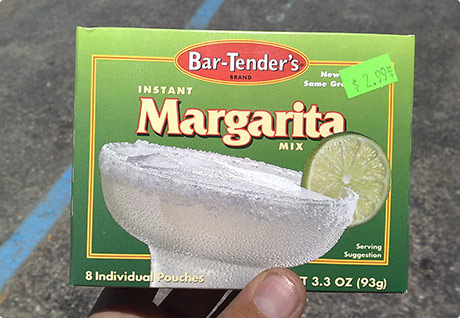 Itook us a while to get into on trail boozing, we needed to get a bit of a base layer of fitness before carrying the extra weight. But by Northern New Mexico we were ready, the drink of choice was Margarita made from powered lemon & lime drink mix, Tequila, water and some of the abundant snow and ice all around us. Halfway through we switched to Rum (cheaper from the liquor store) mixed with various fruity flavours of Crystal Light. 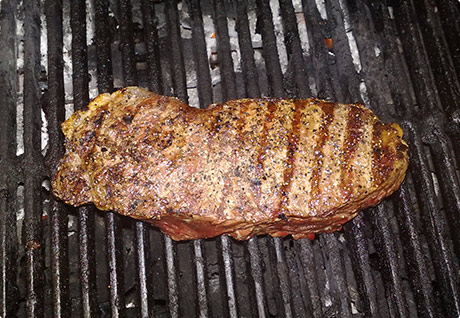 One of our rules of walking was that when we got to town the first evening meal had to be the biggest steak they had on the menu followed by apple pie. We couldn’t always get an apple pie, but we never failed to get steak :) Our biggest was 36oz from Burkes Chop house in Jackson Hole. Our best was from the Backstreet Steak house in Grand Lake. Our most unexpected was donated by a rancher we met in the middle of nowhere and fried up on our stove. And our most deserved was in Waterton when we’d just finished the CDT, we managed to convince the chef at the Kilmorey Lodge the cook us up a steak twice as big as the biggest ones he had on his menu! 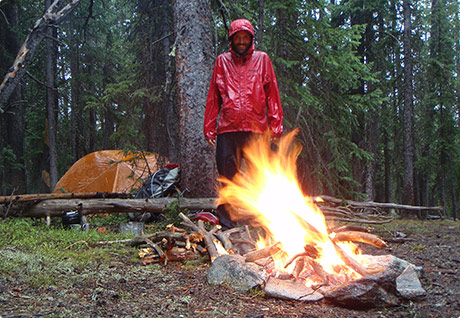 Iknow a lot of folk don’t agree with having campfires, but I love them, nothing raises the spirits like making a fire and they just smell so good :) We didn’t have them every night by any means, but on a cold wet evening like above they were indispensable. 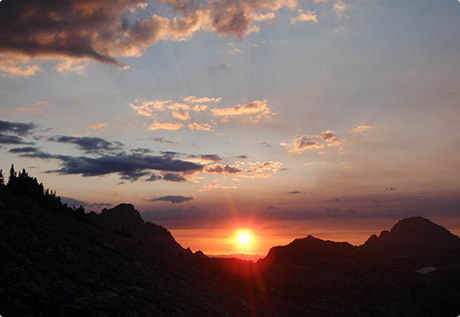 Spending 6 month living outside you get to see some pretty amazing sunrises and sunsets. My favourite was here on Little’s Peak in The Grand Teton National park, never seen a sunrise last so long, the sky was red for half an hour or more. 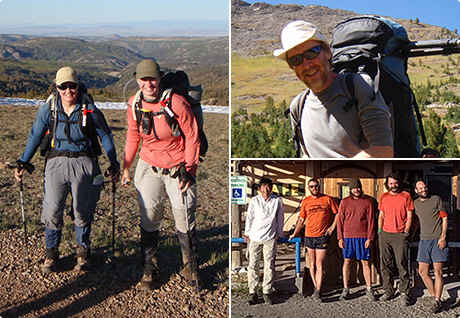 There was 11 north-bounders hiking the CDT in 2008 (as far as we knew). They were: Boston & Cubby, Joe (Red Beard), Heesoo (Impulse) Strix & Sharpshin, Bart, Pinball Wizard, Sunset and Sicily B. It was a pleasure hiking with all of you :) 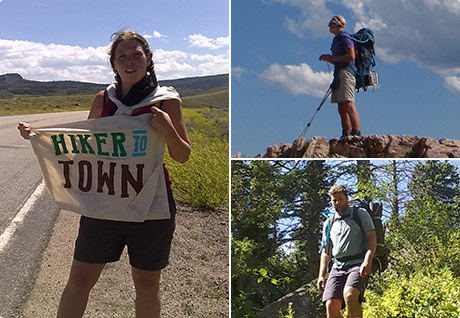 My girlfriend Nicky came out and hiked a bit of Colorado with us for a couple of weeks. It was her first time backpacking and at altitudes up to 4,000m! She did really well :) Then in August my dad and brother came out to coincide with our detour through The Grand Teton National Park. 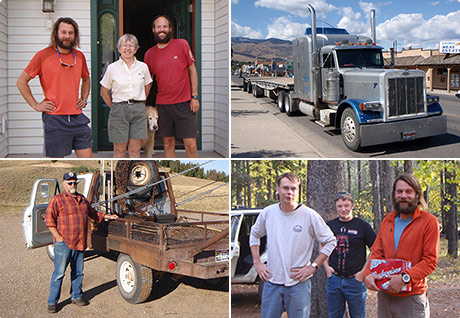 The random acts of human kindness were experienced were probably the most unexpected and cherished aspect of the CDT. The guys in the bottom right drove 30 miles down dirt roads to go fetch us a crate of beer we so desperately needed. The lady in the top left let us stay at her house free of charge for 2 days. The trucker in the top right drove us 50 miles to Salmon in his truck. We were bought beers in bars, handed out beers from the back of pick-ups and ATV’s (everyone drives around with a supply of cold beer!). We were even given a bit of weed on a couple of occasions ;) the list goes on and on, thank you all. 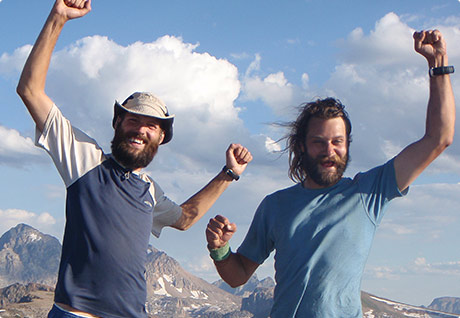 Well finally, I think probably the most amazing thing about our CDT experience was that we managed to stay friends! Six months of barely leaving each others sight, we slept next to each other every night and for 99% of the time there was nobody else to talk to. I think it’s a rare thing (not sure if I could do that with my girlfriend!), it’s definetly made us much closer friends.

20 Photos not enough? Then check out all of Paul’s photos on Flickr, or view all the blog posts we made en-route.